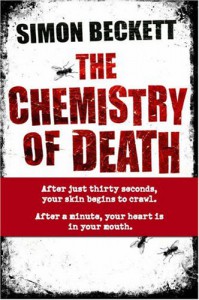 Three years ago, David Hunter moved to rural Norfolk to escape his life in London, his gritty work in forensics, and a tragedy that nearly destroyed him. Working as a simple country doctor, seeing his lost wife and daughter only in his dreams, David struggles to remain uninvolved when the corpse of a woman is found in the woods, a macabre sign from her killer decorating her body. In one horrifying instant, the quiet summer countryside that had been David's refuge has turned malevolent—and suddenly there is no place to hide.

The village of Manham is tight-knit, far from the beaten path. As a newcomer, Dr. Hunter is immediately a suspect. Once an expert in analyzing human remains, he reluctantly joins the police investigation—and when another woman disappears, it soon becomes personal. Because this time she is someone David knows, someone who has managed to penetrate the icy barrier around his heart. With a killer's bizarre and twisted methods screaming out to him, with a brooding countryside beset with suspicion, David can feel the darkness gathering around him. For as the clock ticks down on a young woman's life, David must follow a macabre trail of clues—all the way to its final, horrifying conclusion

Cut above the usual formulaic ‘nasty, yet inventive, serial killer’ book. The writing is excellent (curiously old fashioned style I thought) and Dr David Hunter an appealing and believable lead with a fine supporting cast.
The creepy atmosphere of the book was excellent especially around the village of Manham with its paranoid/hostile community which put me in mind of the film The Wicker Man. Good stuff