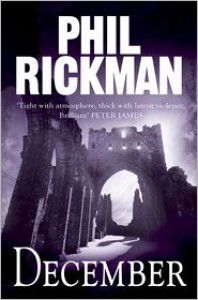 Brilliant intro to this novel from http://brightjul.wordpress.com/tag/abbey-tapes-the-exorcism/

Without giving away too much of the story, here’s the gist: In December of 1980, four musicians were invited to the ancient Black Abbey in Ystrad Ddu, Wales, near the Skirrid (a mountain) to record an album as the band Philosopher’s Stone. It turned out to be an almost cruel trick by the record producer to exploit these sensitive, psychic artists. The Abbey itself had been haunted since the 12th century when the Welsh bard Aelwyn Breadwinner (Breuddwydiwr, Welsh for “Dreamer”) died there. And each of the musicians had his own ghosts or obsessions which all seemed to come into play that fateful night, December 8… the same night John Lennon was killed. The tapes for the notorious “Black Album” recorded that night were thought to be destroyed.

The musicians scatter and live with the damage done that night. Fourteen years later, the tapes resurface and the group is persuaded to reunite for another session. For the group and their friend and producer, Prof Levin, it becomes a reluctant attempt to heal, exorcise perhaps, the evils which still haunt them, the Abbey, the town and the Skirrid. Plenty of fascinating characters, bits of Welsh history and mystery, and scary stuff goes on. December has been called “horror” and does have just enough blood, guts, and ghosts to satisfy that genre; but the depth of characterization and empathy elevate the novel beyond horror and in fact it works as a murder mystery/crime fiction. Rickman likes to call it a ghost story. Suffice it to say, if you are looking for cozy, you’d best look elsewhere. Especially alluring are Rickman’s sardonic humor, occasional eroticism, and tidbits about the inner workings of the music industry.
Tweet
1958 BOOKS